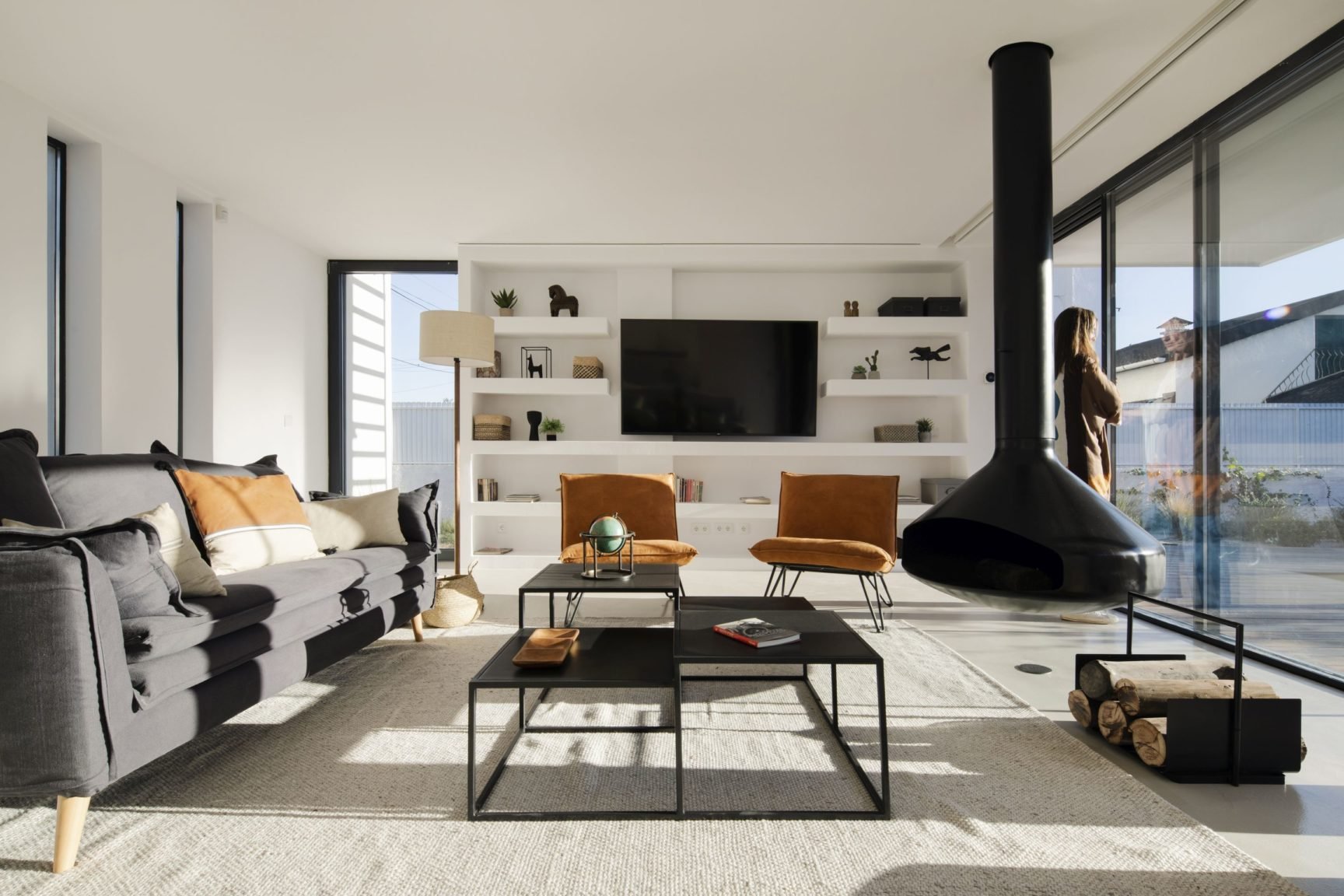 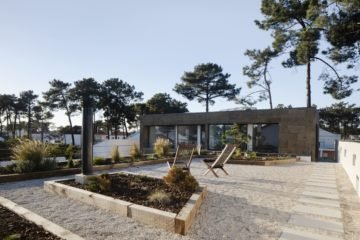 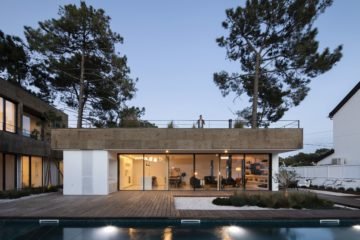 The project is (built) in Aroeira, a pine forest area on the south side of Tejo River. Since the 70s-80s, it became an area for weekend and holiday homes, due to its proximity to the Portuguese coast. As a result, there was an abrupt division of land, resulting in the devastation of the pine forest area. The goal was to integrate the building into the surrounding landscape, by choosing a strategic position to settle the house and by selecting cork as the main covering layer – a camouflage around the trunks of the pine trees.

The program presented to the architects by the client was based on the desire to build a special place where his family and friends could gather. The house, on the one hand, should have a practical and playful character, which would encourage an active social life, and on the other hand, it should allow the creation of a shelter for himself.

The house is developed in two volumes, with opposite directions – a longitudinal body with one floor for the social area and another with two floors for the private area of the house. These volumes are articulated through a main circulation axis that, starting from the entrance, establishes a connection with the private areas, extending itself to the social area. On the first floor, through another axis, perpendicular to the previous one, we have the guest rooms, with direct access to the garden above the first volume.

Through the arrangement of these volumes, the exterior areas are divided into different areas, providing distinct experiences with various scales of privacy. The main area is the central outdoor space, which merges with the social area of the house through a large sliding glass door. In the remaining areas, the spatial fluidity between interior and exterior and natural lighting were also privileged, through the opening of large windows to Southeast and Southwest. On the other hand, the northeast and northwest facades work as a second wall of the house, creating a visual barrier with the public road.

For the landscape project we considered the region’s climate and the increasingly accentuated scarcity of water. It was therefore decided to create a Mediterranean-style garden, choosing plants that do not require much maintenance, and avoiding grassy areas – covering the soil with gravel and pine bark, ensuring its permeability, without the need for watering. 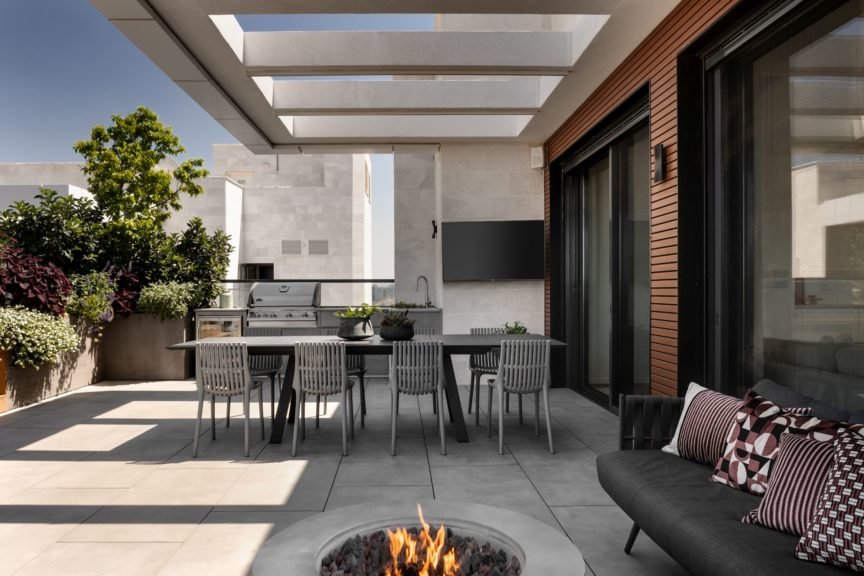 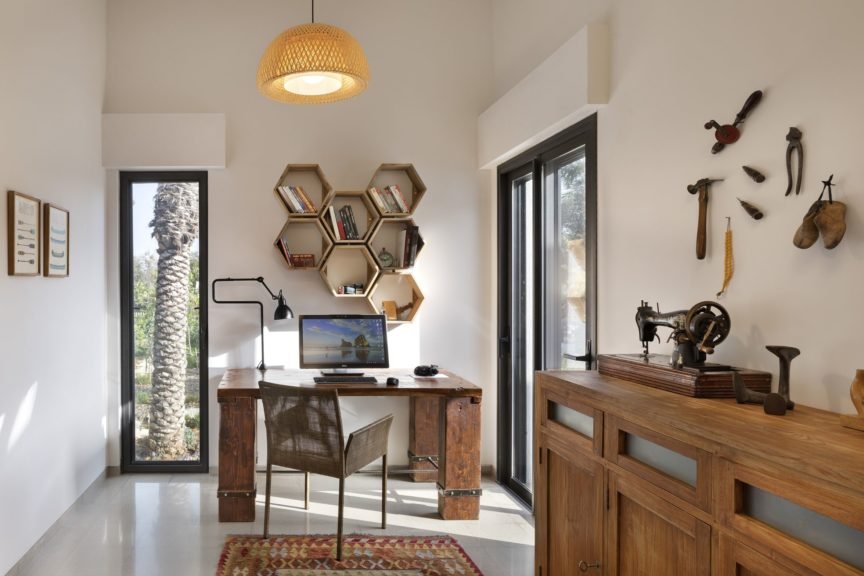 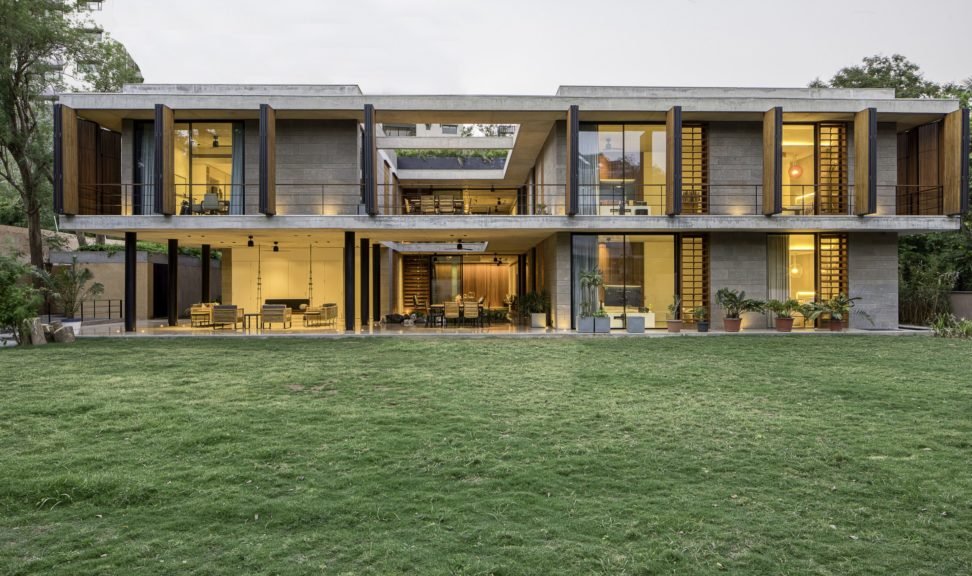